James Ensor (1860-1949) is one of the least known but intriguing of artists, and this small exhibition is well worth a visit. He was born to an English father and Flemish mother in the port of Ostend, a popular beach resort. He saw the resort expand, living with his mother and aunt who ran a shop for souvenirs and curios. He went to art school in Brussels where he claimed to be misunderstood, but  became part of the liberal progressives which encouraged his art. He co-founded a group called Les Vingt in 1883 which included artists such as Surat, Monet, Cezanne and Pissaro and other Belgian artists. But he left the group in 1893 and spent most of the rest of his life in Ostend. 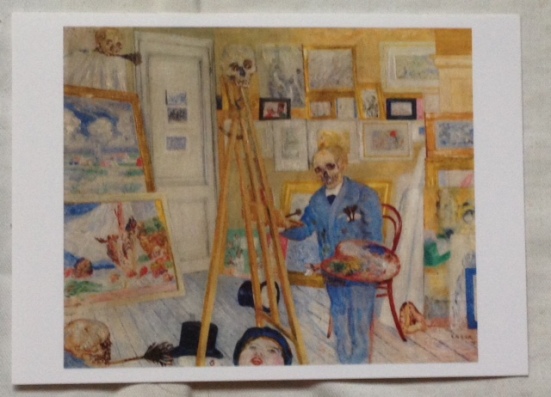 This exhibition concentrates on his early – allegedly most productive years before he was 40. Much of his work features skeletons and masks, allegedly echoing the shop where he grew up in, but also the discovery of skeletons from the Siege of Ostend that were unearthed when he was a teenager. There is also a strong presence of carnival imagery with skeletons, witches and masks.

From 1886 he began producing etching as he claimed “Poor painting! An art exposed to the incompetence of restorers and the imperfections of reproductions… I want to survive  – I think of hard copperplate, as, unperishable in, easy reproduction. I therefore prefer the etching as a means of expression.” 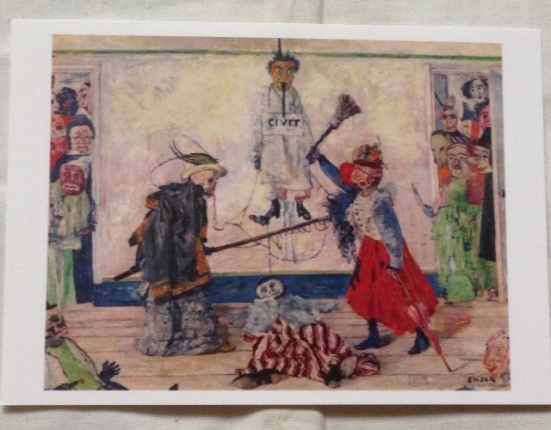 His works are often funny and satirical, especially when showing crowded streets and demonstrations, so reminiscent of cartoonist Cruikshank, also of Belgian heritage. His self portrait is reminiscent of Van Gogh, but some are scary, suggestive of some deep emotional pain. I have long had his skeletons warming themselves by the fire on my wall – so strange, and yet so human…. He also did still lifes, but they still managed to have a sense of strangeness and even menace to them. His Entry of Christ into Brussels is a strange re-imagining of the Bible, as is hIs Adam and Eve Expelled from Paradise is dominated by a dramatic sky that echoes the work of Turner.

After 1900 Ensor’s output waned and he diversified his activities, composing the music, sets and costumes for a ballet and did some writing. IN 1929 he abandoned his British citizenship to become a Baron in Belgium. His work influenced artists such as Kandinsky and Beckman.

The gallery guide claims some surprise that Ensor is so little known in the UK, but I’m not surprised as he seems a thoroughly Low Country artist. His style has little in common with British art, so it is no surprise to me he is better known there. I am intrigued by a final anecdote – in 1933 when Einstein was on his way to America, he stopped in Ostend to meet Ensor. Oh to be a fly on the wall for that meeting.