I just found this feature from the Independent newspaper of 15 August 2009 which ran over 3 pages. The article shocked the newspaper and it shocked me enough to keep the whole piece. In the wake of the recent election it is worth looking at it again. Why do the Republicans hate – or fear – social health care so much? Isn’t freedom from pain and illness an integral part of America’s much vaunted independence?

It is also a wake up call to Britons to save our besieged NHS.

This is from Guy Adams in Los Angeles:

“They came in their thousands, queuing through the night to secure one of the coveted wristbands offering entry to a strange parallel universe where medical care is a fee and basic right and not an expensive luxury. Some of these Americans had walked miles simply to have their blood pressure checked, some had slept in their cars in the hope of getting an eye-test or a mammogram, others had brought their children for immunizations that could end up saving their life.

IN the week that Britain’s National Health Service was held aloft by Republicans as an “Evil and Orwellian” example of everything that is wrong with free healthcare, these extraordinary scenes in Inglewood, California yesterday provided a sobering reminder of why President Barack Obama is trying to reform the US system.

The LA Forum, the arena that once hosted sell-out Madonna concerts, has been transformed – for 8 days only – into a vast filed hospital. In America, the offer of free healthcare is so rare, that news of the magical medical kingdom spread rapidly and long lines of prospective patients snaked round the venue for the chance of getting everyday treatments that many British people take for granted.

In the first 2 days, more than 1,500 men women and children received treatment worth $503,000 (£304,00). Thirty dentists pulled 471 teeth; 320people were given standard issue spectacles; 80 had mammograms; dozens more hd acupuncture, or saw kidney specialists. By the time the makeshift medical centre leaves town on Tuesday, staff expect to have dispenses $2m worth of treatments to 10,000 patients. 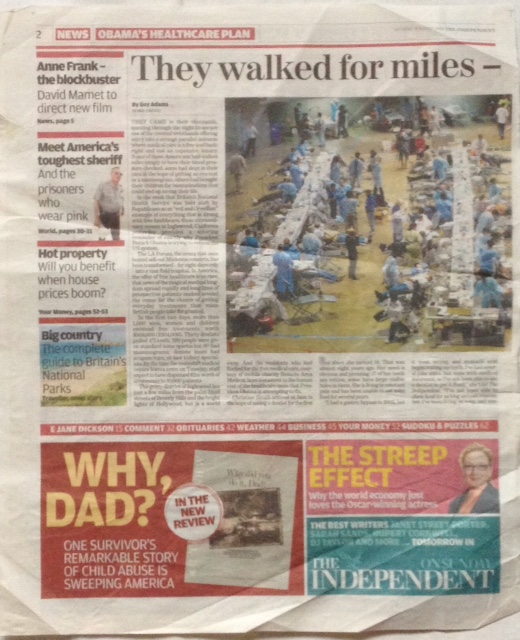 The gritty district of Inglewood lies just a few miles from the palm-lined streets of beverley Hills and he bright lights of Hollywood, but is a word away. and the residents who had flocked for the free medical care, courtesy of mobile charity Remote Area Medical, bore testament to the human cost of the healthcare mess that President Obama is attempting to fix.

Christine Smith arrived at 3am in the hope of seeing a dentist for the fist time since she turned 18. that was almost 8 years ago. Her need is obvious and pressing: 17 of her teeth are rotten; some have large visible holes in them. sh e is living in constant pain and has been unable to eat solid food for several years.

“I hd a gastric bypass in 2001, but it went wrong and stomach acid began rotting my teeth. I’ve had several jobs since, but none with medical insurance, so I’ve not been able to see a dentist to get it fixed,” she dolt the Independent. “I’ve not been able to chew food for as long as I can remember. I’ve been living on soup, and noodles, and blending meals in a food mixer. I’m in constant pain. Normally it would cost $5,000 to fix. So if I have to wait a week to get treated for free, I’ll do it. This will change my life.”

Along the hall, Liz Cruise was one of scores of people waiting for a free eye exam. She works for a major supermarket chain but can’t afford the $200 a month that would be deducted from her salary for insurance. “It’s a simple choice: pay my rent or pay my healthcare. What am I supposed to do?” she asked. “I’,m one of the working poor: people who do work but can’t afford healthcare and are ineligible for any free healthcare or assistance. I can’t remember the last time I saw a doctor.”

Although the americans spend more on medicine than any other nation on earth, there are an estimated 50 million with no health insurance at all. Many of those who have jobs can’t afford coverage and even those with standard policies often find it doesn’t cover commonplace procedures. California’s unemployed – who rely on Medicaid – had heir dental care axed last month.

Julie Shay was one of the many, waiting to slide into a dentist’s chair where teeth were being drilled in full view of passers-by. Fro years, she has been crossing over the Mexican border to get her teeth dozen on the cheap in Tijuana. But recently, the US started requiring citizens returning home from Mexico to produce a passport (previously all you needed was a driver’s licence), and so that route is now closed. Today she has 2 abscesses and is in so much pain she can barely sleep. “I don’t have a passport and I can’t afford one. So my husband and I slept in the car to make sure we got seen by a dentist. It sounds pathetic, but I really am that desperate.”

“You’d think, with all the money in this country, that we’d be able to look after people’s health properly,” she said. “But the truth is that the rich, and the insurance firms, just don’t realise what we are going through, or simply don’t care. Look around this room and tell me that America’s healthcare don’t need fixing.”

President Obama’s healthcare plans had been a central plank of his first-term programme, but his reform package has taken a battering at the hands of Republican opponents in recent weeks. As the Democrats have failed to coalesce around a single, straightforward proposal, their rivals have seized on public hesitancy over “socialised medicine” and now the chance of far-reaching reform is in doubt.

Most damaging of all has been the tide of vociferous right-wing opponents whipping up scepticism at town hall meetings that were supposed to soothe doubts. Senator Arlen Specter was greeted by a crowd of 1,000 at a venue designed to accommodate only 250, and of the 30 selected speakers at the event, almost all were hostile.

The packed bleachers in the LA Forum tell a different story. The mobile clinic has been organised by the remarkable Remote Area Medical . The charity usually focuses on the rural poor, though they worked in New Orleans after Hurricane Katrina. Now they are moving into more urban venues, this week’s event in LA is believed to be the largest free healthcare operation in the country.

Doctors, dentists and therapists volunteer their time, and resources to the organisation. To many US medical professionals, it offers a rare opportunity to plug into the public service ethos on which their trade was supposedly founded. “People come here who haven’t seen a doctor for years. And we’re able to say, ‘Hey, you have this, …’ said Dr Vincent Anthony, a kidney specialist volunteering 5days of his team’s time. “It’s hard work, but incredibly rewarding. Healthcare needs reform, obviously. There are so many people falling through the cracks, who don’t get care. That’s why so many are here.”

Ironically, given this week’s transatlantic spat over the NHS, Remote Area Medical was founded by an Englishman: Stan Brock. the 72-year old former public schoolboy, Taekwondo black belt, ad one time presenter of Wild Kingdom, one of America’s most popular animal TV shows, left the celebrity gravy train in 1985 to, as he puts it, “make people better”.

Today, Brock has no money, no income, and no bank account. He spends 365 days  a year at the charity events, sleeping on a small rolled-up mat on the floor and living on a diet of porridge and fresh fruit. In some quarters, he has been described, without too much exaggeration, as a living saint.

Though anxious not to interfere in the potent healthcare debate, Mr Brock said … that he, and many other professionals, believes the NHS should provide a benchmark for the future of US healthcare.

“Back in 1944, the UK government knew there was a serious problem with lack of healthcare for 49.7 million British citizens, of which I was one, so they said, ‘Hey, Mr Nye Bevan, you’re the minister for Health.. go fix it’. And so came the NHS. Well, fast forward now 66 years, and we’ve got about the same number of people here in the US, who don’t have access to healthcare. I’ve been very conservative in my outlook for the whole of my life. I’ve been described as being bout 90,000 miles to the right of Attila the Hun. But I think one reaches the reality that something doesn’t work… In this country something has to be done. And as a proud member of the US community but a loyal British subject to the core, I would say that if Britain could fix it in 1944, surely we could fix it here in America.”