I am fascinated by the cult of the saints, especially as they are so poorly misunderstood in these determinedly anti-papist Isles. Europe still has churches and shrines to saints, and they know their histories, even in protestant regions, but here they were pretty thoroughly wiped off the face of the earth. St Barbara, my namesake, suffered particularly badly, with records of only 2 churches dedicated to her in England, and has since been declared a non saint by Rome. As if there’s any proof for God, but we’ll let that pass.

Saints were not worshipped; they were intermediaries between humans and God; people asked them to help them in return for prayers, or good works. Saints specialised in certain problems or afflictions, so people went on pilgrimages for their help. But they often appeared as groups looking down on the congregation, so felt like friends, people they could talk to when respite was needed from their often hard lives.

This is from the Oxford Dictionary of Saints: (date unknown) …There is no trace of an ancient cult, although Barbara was alleged to have been killed in the persecution of Maximian (c303). Her Greek Acts, notoriously unhistorical, were not written until the 7th century, even more suspicious. Nicomedia, Heliopolis, Tuscany and rome all claimed to be her place of death. This uncertainty did not prevent her cult becoming very popular in he later Middle Ages, especially in France.

The Golden Legend tells of how she was shut up in a tower by her father Dioscorus, so that no man should see her. None the less princes sought her hand in marriage. She became a Christian while her father was away and decided to live as a hermit in a bah house he had built. Here she made the workmen build a third window in honour of the holy Trinity. In his fury at her becoming a Christian he nearly killed her, but she was handed over to a judge who condemned her to death. Her father was struck by lightning and died. This was the basis of her patronage of those in danger of sudden death, first by lightning, then by subsiding mines or cannon-balls. Hence her patronage of miners and gunners.

The first known representation of her is an 8th century frescoe at S. Maria Antiqua Rome; she is found, often with the equally mythical Margaret of Antioch on late medieval English screens and stained glass. Her usual emblem is a tower. The painting of her by Jan van Eyck in the Royal Museum in Antwerp is probably the most famous representation.

I seem to recall her being associated in Europe with Catherine as wise virgins, and the two are often confused, and equally deemed mythical. Her association with death, I think was to do with the horrific conditions in Medieaval Europe when a good death became of prime importance when so many were being struck down by plagues and pestilences. She is often associated with masons, and makers of gunpowder, in fact any dangerous profession. Fir the same reason, I think she fell from favour, and her links with death make her a rather fearsome saint, and one known for disobeying her father, and – at least indirectly – for his death, so not surprising that a strong independent female fell from favour.

There is also some confusion between her and Mary Magdalen, as towers could look like ornate jars of ointment. This happened with a stained glass window at the top of the stairs in Wells Cathedral. An image of the Magdalene was some years ago renamed St Barbara.

Here’s a few images of her:

She seems to have been particularly popular in France. This is from Cluny Museum, early 16th century. she holds a palm of sainthood, a book of her learnedness and is beside her trademark tower. She is also  shows the bendyness of mediaeval art, suggesting this is based on an old painting.

This is from 1525, by B I Bryn of the Netherlands. Not sure why it is Barbara, as no real tower in sight. Love the jewellery – she looks like a real earth mother type of the 1960s. 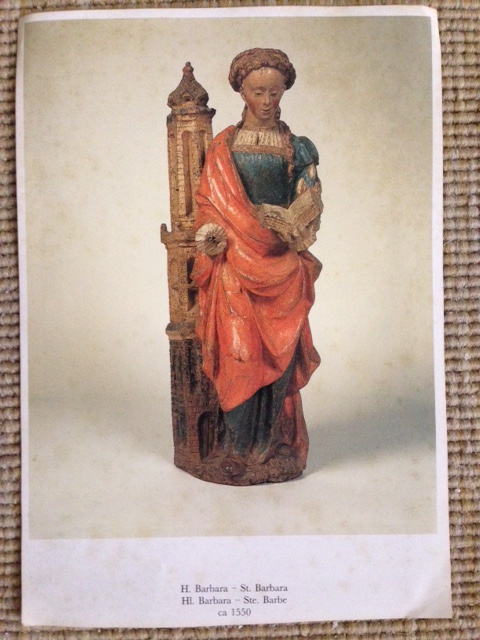 Not sure where this one is from – cut out of a diary. circa 1550, of wood so has taken a beating including the loss of her right hand. I’m guessing she’s north German.

This is a really modern take on her – a whole new church by he brilliant Freidrich Huntertwasser, in Weststeiermark, Austria from 1987/8