This is one of the lesser known attractions of London, in the former parish church of St Mary’s, Lambeth, facing the Thames and next to the Archbishop of Canterbury’s Palace. It has a wonderful garden, the former graveyard, maintained by volunteers.  It is free to enter, but there is a charge for special exhibitions. They have a great gift shop with a good range of plant and garden related books. and their vegetarian cafe is wonderful.

This is the knot garden. These were popular in Tudor times, not just as an attractive addition to a rich person’s home, but as a means of employing the poor, often elderly and fail, as they were so labour intensive and not too demanding physically:

This is Captain Bligh’s tomb. He lived down the road. It is topped with a breadfruit, the collection of which was the point of the Bounty expedition which was so successful.  It is made of Coade Stone, made by Mrs Eleanor Coade to a secret recipe – see an earlier post – which is why it has weathered so well.

And here are breadfruit on top of a column on the nearby bridge. 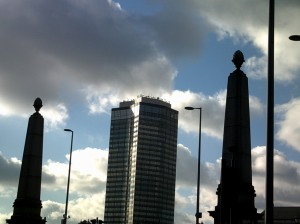 This is the wonderful tomb of the Tradescants, who were the first plant collectors under Queen Elizabeth. Spooky!

And here is a plaque to the Tradescants to commemorate the opening of the museum.

In the entrance porch is a memorial which records a very unusual death:

“To the memory of William Bacon? [can’t read my writing] of the Salt Office, London, Gent, who was killed by thunder and lightning at his window July 12 1787 Aged 34 years. “