I reviewed a book a while ago called ‘Looking at Animals’ by John Berger, about how much our connection with animals has changed; once humans were surrounded by beasts; they were our intermediaries with the outside world, and literature was full of human interaction with them. Today most of us only know about animals as pets, a far cry from the working or wild versions.

Animals are seldom memorialised, but in the gardens of Tredegar House near Newport, Wales, is a hedged in area dedicated to a dog and a horse owned by Geoffrey Morgan.

The smaller one is to his Skye Terrier,: 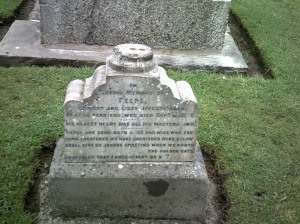 “In loving memory of Feeps Fondest and most affectionate of my Terriers, who died September 6 1898

“O honest heart was all his master owed.”

“There are some of the good and wise who say Dumb creatures we have cherished here shall give us joyous greetings when one day we reach the golden gate. Is it folly that I hope it may be so?”

The larger memorial shows the horse and rider, badly worn, with the following information:

“In memorial of sir BRIGGS, a favourite charger, he carried his master, the Hon Geoffrey Morgan, Captain of the 17th Lancers, boldly and well in the battle at Alma, in the first line of the cavalry charge at Balaclava and at the battle of Inkerman, 1854. He died Tredegar park February 9 1874 aged 28 years old. 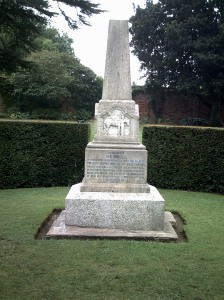 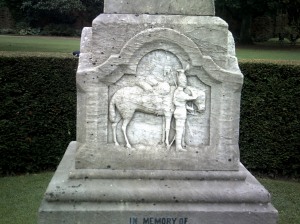 In the house is a fine painting of horse and rider, with Morgan claiming the horse repeatedly saved his life, especially has the horse had belonged to his brother, but he had lost his own two horses on the way to the battle. Problems with copyright means I couldn’t share this.