This is a description of a visit to France and the Netherlands, of the new Palais Royal in Paris in 1817 by J. Merritt of Liverpool: 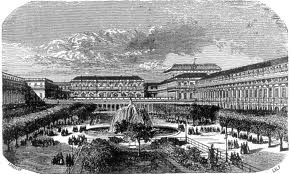 “In the evening we visited the far-famed square of the Palais Royal, to which our hotel is fortunately immediately adjacent. Here again, I must confess, that the first aspect of this magnificent pile rather went beyond my previous conception, although I had read many descriptions of it, written in that tone of exaggeration from which very few travellers who describe such objects, are entirely free. If it were not for the hideous deformity of a row of wooden shops that cross the parallellogram of about one third of its longtitude, at once reducing its dimensions and destroying its symmetry, nothing would be wanting to the complete beauty of this unrivalled palace. The architecture is so elegant, that notwithstanding the long and uniform facades of the sides, there is no sign of heaviness or formality. The lengthened arcades, and the shops within them, are more striking to foreigners in general than to an Englishman, who is accustomed to the brilliance of Fleet St and Cheapside, the astonishing microcosm displayed in the promenads and in the interiors of the Palais Royal have been frequently and elaborately described…….”